Tuesday 19th Jan. Phoned by a man speaking reasonable but rapid English with an accent indicative of the Indian sub-continent. He called himself Anthony and explained he was from “Computer Maintenance Company” which was employed by Microsoft as a “caretaker” for the computer systems. “Anthony” went on to say that the Microsoft system had detected a serious assault on my computer and that a piece of malware had been installed that could have a detrimental effect on my computer and business. Now, if I could log onto my computer he would talk me through removing this malware. (No, I did not!)

As a means of demonstrating his honesty he gave the identification number of my computer which he said could only have come from Microsoft (Microsoft sells software not computers) which he gave as: 888DCA60-FC0A-11CF-8F0F-00C04FD7D063 (No, not a number associated with my pc) which I wrote down manually. He gave his return phone number as 0800 352 6294.

I phoned my own IT maintenance who said they are getting similar calls and that a phishing scam is targeting individuals and small businesses.

Wednesday 20th Jan Anthony phoned again and asked me to log on to my computer. I told him I did not believe him and gave him a brief rendition about the data protection act.

Monday 25th Jan 08.50hr Anthony phoned again and I terminated the phone call immediately. I reported this to Action Fraud via their website.

Hens braved the mixer monster to inspect the plastering.

Plastering is under way. Need some warmer,drier weather to help the plaster and concrete floor to dry out. 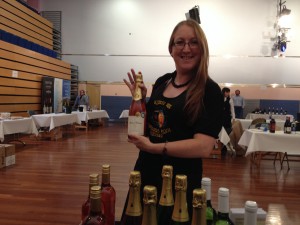 Laura recently created The Leicester Tapas Trail, and we are very pleased to have someone of her experience and credibility advising us in the winery.

Builders have stopped for Christmas, so Liz had been priming and undercoating the doors when rain permitted. Bank Holiday Monday posed a dilemma. Lovely sunny weather BUT the elderflower wine needed bottling AND the doors needed their gloss coat.

The elderflower wine won! With great help from Laura and Mike Hadland, over 300 bottles were processed and are now in our cool, dark wine store for the final stage in maturation. The painting awaits the next fine day. 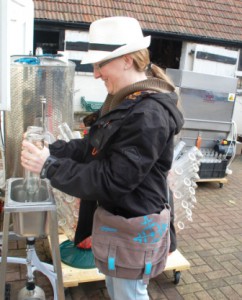 Our lovely volunteer, Laura, is a great friend of the chickens and has given us a croched table mat and a pair of chicken oven mitts for Christmas which is very kind of her. We showed the mitts to the chickens who did not understand the roast chicken jokes, but Ebony wondered if the mitts contain an illustration of herself? What do you think? 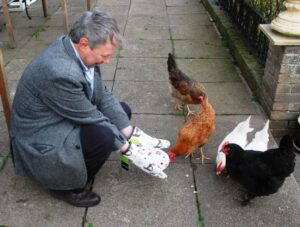 Roof slates finished and ridge tile in place before heavy rain came. Both doors up, and Liz managed to get them wood primed and undercoated by Christmas Eve. Looking anxiously at the weather forecast. Bad weather expected over next few days. Batten down the hatches! Good job builders are having the week off. Hope weather improves in the New Year.

We were invited to the opening of Loughborough’s first ever micro-pub. What a lovely place! Beautiful, clean relaxing decor and warm welcome by hosts. Then see which wine their VIP guests purchased!! We felt really proud that the Needle and Pin is selling our wines. 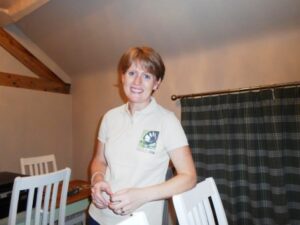 The roof slates are going on. Good match with the existing ones on the garage. Really pleased that the roo

f is likely to be finished by Christmas.

Building inspector gives the thumbs up for the roof structure. Slates can now go on.

We had a great time at the Victorian Christmas market at Stonehurst farm in Mountsorrel. So impressed that we might have a stall there next year. 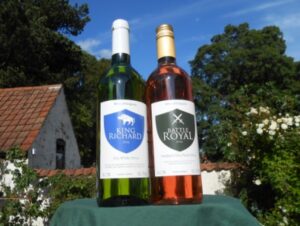 delivered safely to Wicked Hathern Brewery for their opening of Loughborough’s first ever micropub in The Rushes. Best wishes for a great future.

Electric radiator overheated and melted extension cable onto socket in winery. Managed to track the electrician down and new electric socket put in.Radiator consigned to skip! New radiator, of a different make, purchased.

Trying to get the red wine, Henry, warm enough for a malo-lactic fermentation is a real battle. King Richard, dry white wine, is behaving perfectly and is utterly gleeful about Henry’s downfall. Most people seem to think that the War of the Roses is over – not here!

At last! The roof slates arrive.

I was just applying the last brush stroke of gloss paint to the door frames when it chucked it down with rain. Aaah!

No builders as we are still waiting for roof tiles. So we went off to Rempstone for a splendid evening. See blog.

A lovely lady called Rosemary came to stay at the hotel next door with the express intention of buying some of our wine. She had tried King Richard at Ragdale Hall and was so smitten she made this long journey from London. It was so nice to show her round the vineyard and hear about her bridge playing (my late mother was a fanatical bridge player)

Gutters on. Still waiting for roof slates. Spent time in winery trying to keep King Henry warm in order to get the malo-lactic fermentation started.

We are waiting for roof tiles, so builders cannot move on to the next stage. Sooo…. it was fortunately quiet and builderless in the courtyard when Ben Jackson visited with microphone in hand. He was impressed by the trophy King Richard 2014 won at last week’s Mercian Vineyards Association Wine Challenge and a little envious of the side of smoked salmon that came with it! Then he went into the winery, hot water bottle in hand, and was introduced to King Richard 2015 and then to …. wait for it… Henry! 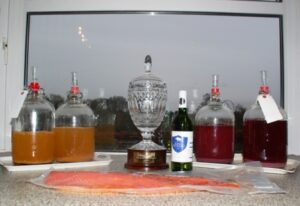